Parigha = timber, bar (which is closing a gate) 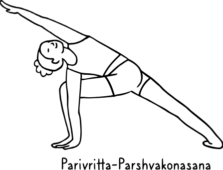 Parivritta = reverse, turned, reverse, upside down, backwards
Pashchima = west = back side of the body
Tan = strech out, widening, extend 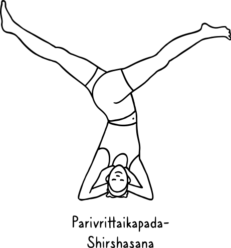 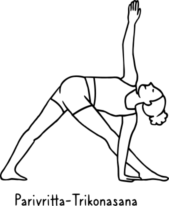 Control of Prana, the knowledge of breath, extension and control of breath

Prana =  live itself or consciousness, breath, breathing, vitality, wind, energy, strength or soul as contrast to the body, part of the cosmic breath, “which is continuous everywhere”

Puru = city, commune
Purusha = the person who lives in the city

2. child of Avidya
craving, holding on, / not able to let go

chasing satisfaction
– searching for satisfaction, when not available
– wanting more than existing
– not able to let go what exist

“In this asana, a dead person is imitated. Once life is exhaled, the body remains motionless. If you lie motionless for some time and your thoughts remain still, although you are fully conscious, you learn to relax. This conscious relaxation strengthens and refreshes the body and mind.”

Siddha = A half god creature, which is very pure and light and suppose to have supernatural power (siddhis).

This position is dedicated to the big hero, which Shiva created of his curly hair.

Once Daksha was celebrating a sacrificial, but he didn’t invite neither his daughter nor her husband Shiva, the highest of all gods. However Sati, Dakshas daughter went to the fest. But because she got insulted and humiliated, she was throwing herself into the fire and burned to death.

When Shiva heard about it, he felt challenged, riped off one of his curly hair and through it on the ground. A great hero, Virabhadra, raised and awaiting his orders. He was told to guide Shivas army to Dakshas sacrificial and disturb them.

Viradhadra and his army emerged at the sacrifical as a tornado, destroying the fest, vanquished the other gods and priests and beheaded Daksha.

Shiva, in grieve over the death of Sati abalienated and immersed in meditation.

Sati was reborn as Umi in the house of Himalaya. Once more she found Shivas love and due to her effort she gained his heart.

This story comes from the poetry of Kumara Sambhava (Birth of God of War) of Kalidasa.

Sukha – the ability to keep a position without effort

“A mindset we feel as comfortable to be able to observer our selfs. (…) Being attentive and relaxed and therefore being able to see everything clear.”

tap = heating up or cleaning

We use cookies on our website to give you the most relevant experience by remembering your preferences and repeat visits. By clicking “Accept”, you consent to the use of ALL the cookies.
Cookie settingsACCEPT
Manage consent

This website uses cookies to improve your experience while you navigate through the website. Out of these, the cookies that are categorized as necessary are stored on your browser as they are essential for the working of basic functionalities of the website. We also use third-party cookies that help us analyze and understand how you use this website. These cookies will be stored in your browser only with your consent. You also have the option to opt-out of these cookies. But opting out of some of these cookies may affect your browsing experience.
Necessary immer aktiv
Necessary cookies are absolutely essential for the website to function properly. This category only includes cookies that ensures basic functionalities and security features of the website. These cookies do not store any personal information.
Non-necessary
Any cookies that may not be particularly necessary for the website to function and is used specifically to collect user personal data via analytics, ads, other embedded contents are termed as non-necessary cookies. It is mandatory to procure user consent prior to running these cookies on your website.
SPEICHERN & AKZEPTIEREN